CLIMATE COMPENSATION FOR "LOSS AND DAMAGE"

Apparently this year's climate conference is due to try and reach agreement on the subject of "loss and damage" caused allegedly by climate change caused by global warming caused by the burning of fossil fuels. The linked article, below, discusses this and points out the obvious difficulties of dealing with such a nebulous subject, but as it points out, once the principle has been accepted then some funding becomes expected. Yet another drain on the taxpayer. It is too easy for politicians to spend or give away other people's money to make caring and generous gestures

COP27 — the Camel’s Nose of Loss and Damage Enters the Talks – Watts Up With That?

Vijay Jayaraj: The world is transitioning to fossil fuels

The Washington Times, 25 October 2022 Despite the fanfare surrounding wind and solar, the world’s dependency on fossil fuels is increasing. Last week, Saudi Aramco CEO Amin Nasser said that the world is now “transitioning to coal.”Saad al-Kaabi, Qatar‘s energy minister, says: “Many countries particularly in Europe which had been strong advocates of green energy and carbon-free future have made a sudden and sharp U-turn. Today, coal burning is once again on the rise reaching its highest levels since 2014.”They are right. Global coal demand will reach a historic high in 2022, similar to 2013’s record levels. According to the International Energy Agency, “Global coal consumption is forecast to rise by 0.7 percent in 2022 to 8 billion tons. … Coal consumption in the European Union is expected to rise by seven percent in 2022 on top of last year’s 14 percent jump.”Coal will continue to be a sought-after energy source as “rising gas prices after 2030 will make existing coal-fired generation more economic,” the IEA says. Global energy demand will grow by 47% from now through 2050, and oil is expected to be the major source of energy.Analysts are projecting “a huge gas-to-coal fuel transition in power and industrial sectors” of Europe. Yes, not gas to renewables, but gas to coal. In fact, the European Union’s coal consumption grew 16% year-on-year for the first half of 2022. European countries imported 7.9 million tons of thermal coal in June, more than doubling year-on-year. Annual coal imports are expected to reach 100 million tons by the end of the year, the highest since 2017.Even in the most developed economies of the West like Germany and the United Kingdom, fossil fuels continue to dominate as the only dependable source of energy. Germany is set to become the third-highest importer of Indonesian coal in 2023, ranked just below coal-guzzling China and India.AP says, “Coal, long treated as a legacy fuel in Europe, is now helping the continent safeguard its power supply and cope with the dramatic rise in natural gas prices caused by the war.” Rather than wind or solar, it is coal that is keeping the lights on in Europe.Taking stock of the tremendous performance of coal, a Shaw and Partners senior analyst commented: “Who would have thought dirty ol’ coal would have been the best-performing equities in the last financial year? So far this financial year it’s also the best-performing sector.”Given this reality, can Western economies protect themselves from being victims of their own green policies that neither produce the required energy nor save the planet?Many Western leaders are not ready to admit that this is a misery self-inflicted by their green-energy obsession that compromised the supply of fossil fuels.The global green energy movement’s primary goal is to make economies transition to renewable sources of energy, a move that some believe will help save the planet from climate change. But sources like wind, solar, and biomass are neither reliable nor affordable — nor even “renewable.” These indisputable facts were disregarded as Western economies continued to make their so-called energy transition.As a result, much of Europe, the U.K. and North America find themselves in energy turmoil.Instead of harvesting their abundance of fossil fuels, these economies are in a state of lamentation, desperate for the procurement of the very fuel sources they once despised.Last week, the White House said it was concerned about a cut in oil production announced by OPEC, despite the Biden administration’s denigration of domestic oil. In Europe, leaders are livid over a gas shortage, another fossil fuel that they claim is bad for the planet.Qatar’s Saad Al-Kaabi says that European “green” policies are responsible for high energy prices and that leaders in the West “don’t have a plan.” Energy shortages have forced them to return to the most dependable sources — coal and oil. They are now scampering to ensure energy security for winter, when many believe likely that there will be power blackouts in the U.K. and Germany.The world is now transitioning to fossil fuels — not renewables, despite vast amounts of time and money spent on developing wind and solar technologies.Vijay Jayaraj is a research associate at the CO2 Coalition, Arlington, Virginia. He holds a master’s degree in environmental sciences from the University of East Anglia and resides in India.
at 08:00:00 No comments:

We are constantly being told that global warming is "much worse than we feared" and that we ought to be panicking. A recent example of this was on the news in the last dew days. Svalbard we were told is warming at "six times the global average". Here: BBC Worried That Svalbard Is As Hot As In 1922 | NOT A LOT OF PEOPLE KNOW THAT (wordpress.com) Paul Homewood reveals the truth, which is that Svalbard was warmer in the 1920s and has subsequently cooled until the 1960s and then warmed again.

I don't expect anyone will be surprised to learn that the Somalian government are developing their oil industry while at the same time demanding billions of dollars in compensation for the "climate damage" which they blame on fossil fuels. See here: Somali Government Signs Controversial Coastline Exploration - East African Business Week (busiweek.com)

As Paul Homewood explains the current drought in Somalia is not unusual. He shows the evidence here: Somalia Say Drought Is Due To Climate Change, As They Demand Billions | NOT A LOT OF PEOPLE KNOW THAT (wordpress.com)

The whole "climate crisis" issue is entirely political and is used by political leaders to further their own interests. Any scientific pronouncements are infected by the political imperative. Most people have far too much to lose to try and stand out against the prevailing narrative.

It will all end in failure, as the UN is now itself forecasting, see here: Climate change: UN warns key warming threshold slipping from sight - BBC News There is no way the world will ever follow the path to do without fossil fuels while there is no credible alternative and the penny is finally dropping. Unfortunately my country (UK) will cling to its ruinous path to the bitter end.

Following on from yesterday's thought provoking video I invite you to listen to a very interesting and powerful short lecture by someone who really believes in living in harmony with nature and yet has come to the conclusion that renewables cannot provide the answer. See what he has to say for yourself.

Why renewables can’t save the planet | Michael Shellenberger | TEDxDanubia - YouTube

HOW MUCH ENERGY WILL THE WORLD NEED?

The title of this article is crucial to understanding whether "net zero" is a realistic proposition. Here is a short video which succinctly explains the issue and why renewables will never be the solution. They may play a small role, but going down the route of trying to replace all fossil fuels with them is simply a foolish fantasy.

The Chinese and most of the developing world understands this already, but they keep the pretence going in order to weaken the gullible and naive Western governments which are willing to go along with it 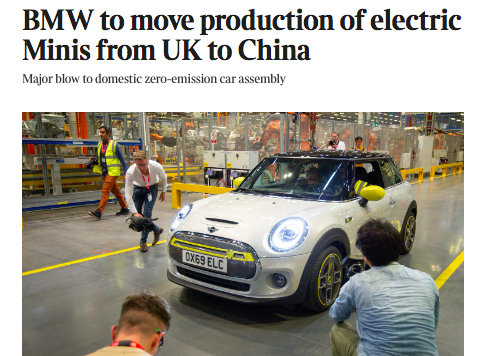 • Britishvolt, a major battery manufacturing startup, is on the brink of collapse.
Both companies have cited high energy prices as the reason for their problems.
Claims that the UK’s economy will be based around ‘green industries’ are clearly false.
• Manufacturing of renewables and EVs will be built in places where energy is cheap, which means places where it is derived from fossil fuels.
• European wind turbine manufacturers are financially struggling and cutting jobs, losing market share to Chinese competitors benefiting from cheap coal.
• Net Zero is driving the wholesale deindustrialisation of Britain which threatens to make the UK uninvestable.
The economic crisis can only be solved by cheap energy
• There will be no economic growth without cheap energy.
• Cheap energy can only be delivered through increased supply of fossil fuels and nuclear, and elimination of renewables.
Net Zero plans must be cancelled as a matter of urgency.

Net Zero is unattainable and a danger to national well-being

ARE WE PAYING WIND FARMS TWICE FOR ELECTRICITY?

This article gives strong evidence that we are. How windfarms charge you twice for the same electricity - Net Zero Watch

No wonder that our electricity bills are shooting up!

So we can expect less choice and more costly food.

WHY WIND TURBINES WILL NEVER SUPPLY ENOUGH ELECTRICITY FOR OUR NEEDS

Here is the answer to all those who think that we can simply stop using fossil fuels and use wind power to have cheap limitless wind energy instead:

Where to begin? Here is an excellent summary. Also read Joanne Nova's excellent Global Warming Skeptics Handbook. At just 16 pages it summarises all the main arguments clearly and concisely. 150,000 copies printed in the USA. Also read why the IPCC are wrong. and CO2 does not cause a problem. Finally for a full understanding read the latest nipcc report.