July Sea Surface Temperatures (SSTs) are now available, and we can see further ocean cooling led by plummeting temps in the  Tropics and SH, continuing the downward trajectory from the previous 12 months.

HadSST is generally regarded as the best of the global SST data sets, and so the temperature story here comes from that source, the latest version being HadSST3.

The chart below shows the last two years of SST monthly anomalies as reported in HadSST3 including July 2017. 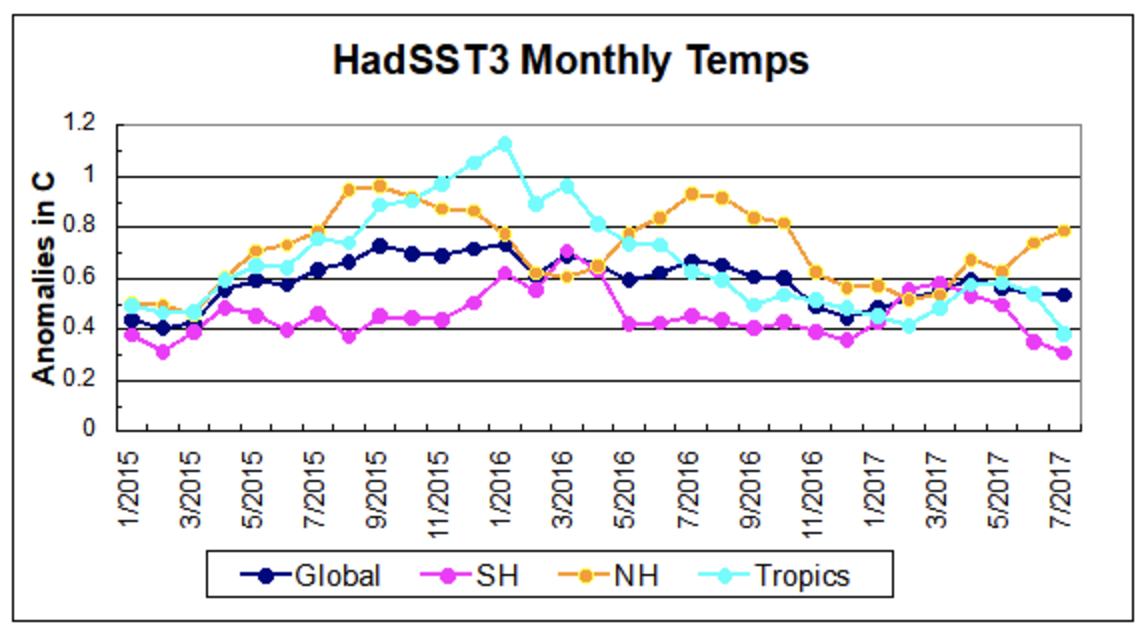 In May despite a slight rise in the Tropics, declines in both hemispheres and globally caused SST cooling to resume after an upward bump in April.  Now in July a large drop is showing both in the Tropics and in SH, declining the last 4 months.  Meanwhile the NH is peaking in July as usual, but well down from the previous July.  The net of all this is a slightly lower Global anomaly but with likely additional future cooling led by the Tropics and also SH hitting new lows for this period.

Note that higher temps in 2015 and 2016 were first of all due to a sharp rise in Tropical SST, beginning in March 2015, peaking in January 2016, and steadily declining back to its beginning level. Secondly, the Northern Hemisphere added two bumps on the shoulders of Tropical warming, with peaks in August of each year. Also, note that the global release of heat was not dramatic, due to the Southern Hemisphere offsetting the Northern one. Note that Global anomaly for July 2017 matches closely to April 2015.  However,  SH and the Tropics are lower now and trending down compared to an upward trend in 2015.

We have seen lots of claims about the temperature records for 2016 and 2015 proving dangerous man made warming.  At least one senator stated that in a confirmation hearing.  Yet HadSST3 data for the last two years show how obvious is the ocean’s governing of global average temperatures.

The best context for understanding these two years comes from the world’s sea surface temperatures (SST), for several reasons:
at 07:30:00

this is so good and impressive article and i will bookmarked it please send me another updates.
Heating and Cooling Hamilton