WASHINGTON/LONDON (Reuters) – U.S. coal exports have jumped more than 60 percent this year due to soaring demand from Europe and Asia, according to a Reuters review of government data, allowing President Donald Trump’s administration to claim that efforts to revive the battered industry are working. 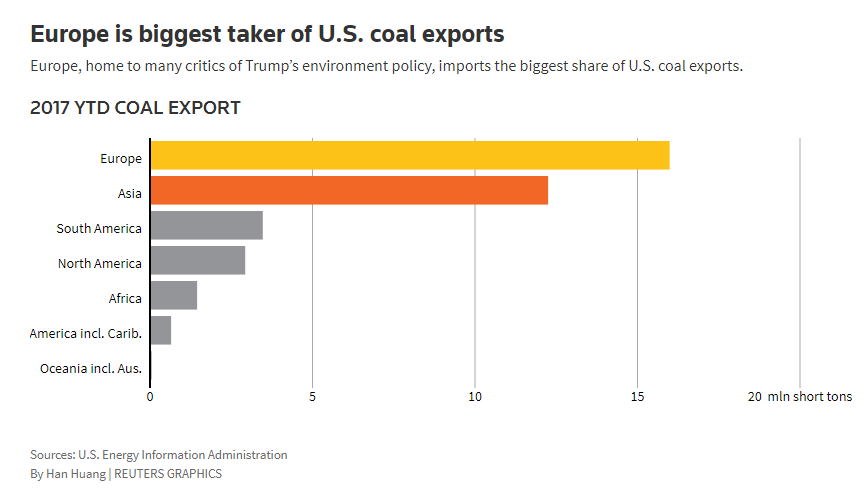 The increased shipments came as the European Union and other U.S. allies heaped criticism on the Trump administration for its rejection of the Paris Climate Accord, a deal agreed by nearly 200 countries to cut carbon emissions from the burning of fossil fuels like coal.

The previously unpublished figures provided to Reuters by the U.S. Energy Information Administration showed exports of the fuel from January through May totalled 36.79 million tons, up 60.3 percent from 22.94 million tons in the same period in 2016. While reflecting a bounce from 2016, the shipments remained well-below volumes recorded in equivalent periods the previous five years.

They included a surge to several European countries during the 2017 period, including a 175 percent increase in shipments to the United Kingdom, and a doubling to France – which had suffered a series of nuclear power plant outages that required it and regional neighbours to rely more heavily on coal.

Nicole Bockstaller, a spokeswoman at the EU Commission’s Energy and Climate Action department, said that the EU’s coal imports have generally been on a downward trend since 2006, albeit with seasonable variations like high demand during cold snaps in the winter.

Trump had campaigned on a promise to “cancel” the Paris deal and sweep away Obama-era environmental regulations to help coal miners, whose output last year sank to the lowest level since 1978. The industry has been battered for years by surging supplies of cheaper natural gas, brought on by better drilling technologies, and increased use of natural gas to fuel power plants.

His administration has since sought to kill scores of pending regulations he said threatened industries like coal mining, and reversed a ban on new coal leasing on federal lands.

Both the coal industry and the Trump administration said the rising exports of both steam coal, used to generate electricity, and metallurgical coal, used in heavy industry, were evidence that Trump’s agenda was having a positive impact.

“Simply to know that coal no longer has to fight the government – that has to have some effect on investment decisions and in the outlook by companies, producers and utilities that use coal,” said Luke Popovich, a spokesman for the National Mining Association.

Shaylyn Hynes, a spokeswoman at the U.S. Energy Department, said: “These numbers clearly show that the Trump Administration’s policies are helping to revive an industry that was the target of costly and job killing overregulation from Washington for far too long.”
at 07:30:00