THE TRUE COST OF UK NET ZERO (APART FROM THE £1.3 TRILLION)

Ross Clark: We are still not being told the true cost of Net Zero

The Daily Telegraph, 5 March 2021The failure to have an honest debate about climate change has squeezed out one vital fact – the Government's targets will leave us poorer. 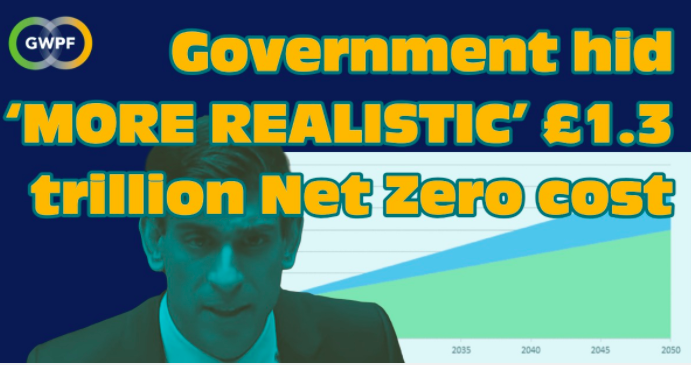 If it involved any other subject, the news that the Government hid estimates of the true cost of one of its policies would be a scandal. Imagine, for example, how bonkers the Guardian would go if it emerged that ministers and civil servants had colluded to conceal their real estimate of the costs of Brexit. But when it emerges that the Treasury withheld what it regarded as the "more realistic" £70 billion a year estimate of the cost of achieving net zero emissions by 2050 there was barely a murmur. There is a long tradition of dishonesty over the cost of climate change policies. It wasn’t so long ago that the Coalition was implausibly trying to tell us that the Climate Change Act was going to save us money, by creating "green jobs" and saving us from ever-increasing fossil fuel prices. The collapse in oil and gas prices in 2014 put paid to that pretence, and when Theresa May’s government upped the legally-binding target contained in the act from an 80 per cent cut by 2050 to net zero emissions by that date the then chancellor, Philip Hammond, did quietly admit it would cost us £50 billion a year. But it now transpires that officials, even at the time, thought that an under-estimate. The Government has got away with committing Britain to such a ruinously expensive policy because we have no proper debate over climate change and what we should do about it. The Climate Change Act was passed in 2008 with only five MPs voting against. Opposition to the net zero target is squashed through emotive charges of climate change "denial" and falsely claiming that all those who criticise climate change policy are stooges for the oil industry. The absence of debate has blinded us to the reality that while many countries have made vague pledges to cut emissions, only a tiny handful have tied themselves down with legally-binding targets which provide no wriggle room. Very few people are aware of a fatal flaw in the Climate Change Act that could condemn most of our remaining manufacturing industry to oblivion. The net zero target only refers to "territorial emissions" – ie those physically spewed out within Britain. It excludes aviation, shipping and emissions elsewhere in the world made in the name of providing goods and services for UK consumers. It is not hard to work out what will happen: UK manufacturing will be forced to relocate to China and other countries which have not been so foolish as to paint themselves into a corner by setting a net zero target before they have any idea how it can be achieved. We have as yet no commercially viable means of decarbonising high-emitting industries such as steel and cement, for example. That is why even the Government’s higher estimate of £70 billion a year cost to achieve net zero by 2050 is likely itself to be an under-estimate. If we lose these industries and are forced to import these goods (to no net benefit for the planet) the cost to the economy will be far greater.The public is right to be concerned about the environment and there are all sorts of reasons why we should invest in clean energy, hopefully eventually phasing out fossil fuels. But the real deniers are those who claim that we can achieve a unilateral policy of net zero by 2050 without serious costs to the UK economy, if not an outright diminution in living standards.
at 19:43:00

The true cost of Net zero CO2 is the cost of closing down the Western economy: nothing less.

To have any effect the effort would have to be Global. That is never going to happen

CO2 atmosphere concentration is ~ 0.04% while the remaining Nitrogen & Oxygen amount to 98%.
Over the years, I have listened to the 'blurb' - that it is necessary to cut or completely eliminate fossil fuel use releasing  CO2 gas, regardless of the fact that Fossil Fuel is unquestioningly the single factor underpinning our living standards today.   Past use of fossil fuels till now,  has hardly dented the pre-industrial CO2 levels -  a mere 1/2% (120ppm/280ppm  now 400ppm)

As demonstrated above, Carbon Dioxide concentrations are so low that attempts to reduce it even further forming the base of our national energy policy to save the planet and ensure our continued existence on it,  is simply totally ignorant rubbish bordering on the fraudulent. If my understanding is correct, then surely it needs exposure !

I simply cannot believe the line that "The consensus is Settled" and "97% of scientists" agree.  What Scientists ? When ? Where ? and in whose pay ? etc., Many projected calamitous disasters have not taken place, while in all my 70+ years I will state that beyond natural variability our climate is the same as it always was.

Even if you tried to look for a CO2 molecule from the air you would be hard put to even find it !

If such a low concentration even if doubled or even trebled for argument's sake,  it would still only bring it to around 1/10th     of one percent of the atmosphere. How then would this concentration , - possibly affect the world's Climate ?