The article below highlights the inconsistency at the heart of Western climate policy. On the one hand they want to eliminate CO2 emissions, but they know perfectly well that to do so while allowing large growing nations like India and China to be exempt will simply destroy jobs in the West thus impoverishing themselves. On the other hand China and India will refuse to join in a policy to prevent them from becoming as rich as Western countries. 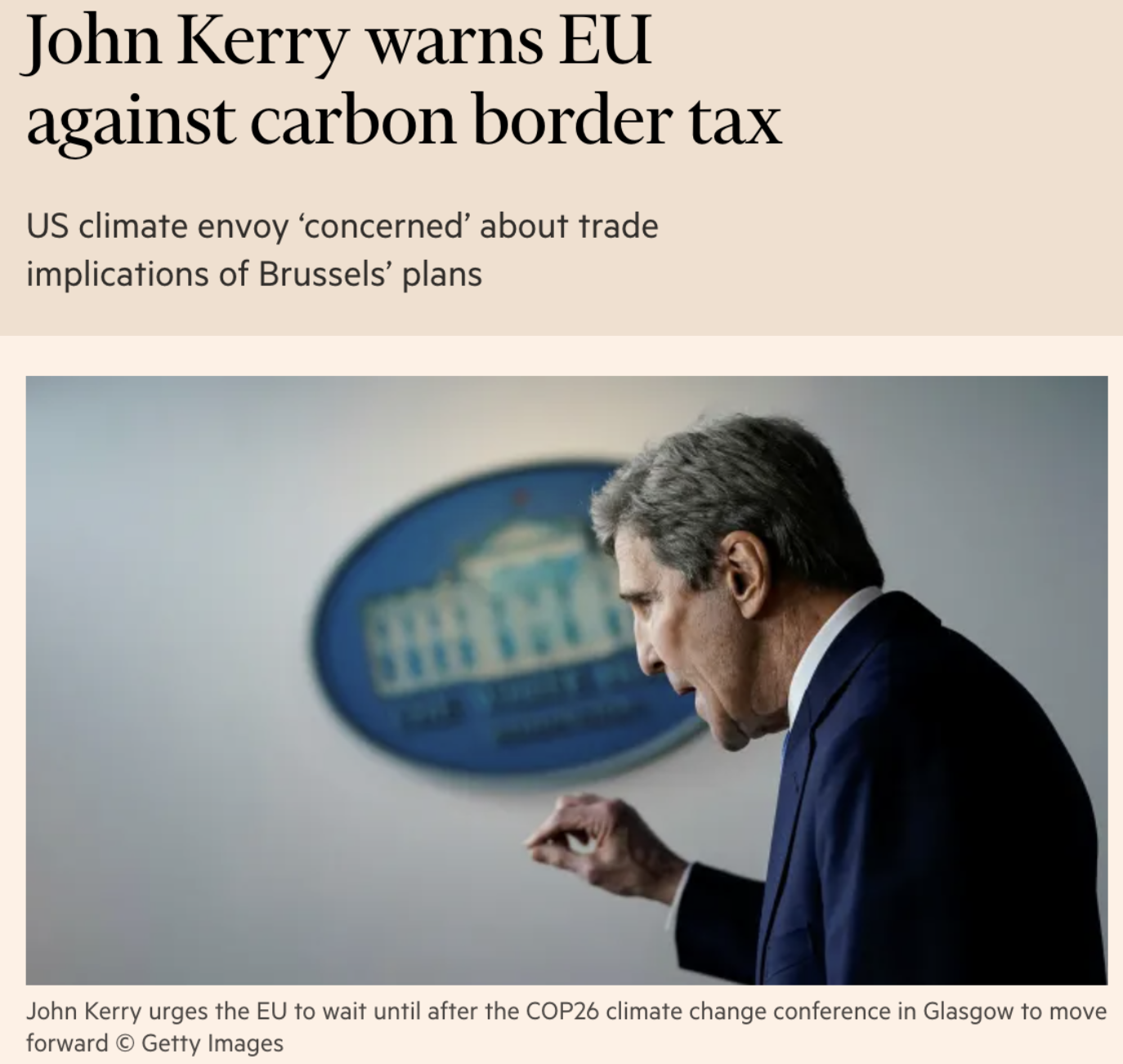 According to the European Commission the EU’s Green Deal and its 2050 Net Zero target are threatening the very survival of Europe’s industries unless a carbon border tax is enforced upon countries that are not adopting the same expensive Net Zero policies. It’s a matter of survival of our industry. So if others will not move in the same direction, we will have to protect the European Union against distortion of competition and against the risk of carbon leakage,” European Commission executive vice-president Frans Timmermans warned in January. On Wednesday, the European Parliament endorsed the creation of a carbon border tax that is planned to protect EU companies against cheaper imports from countries with weaker climate policies. However, it would appear that the Biden administration is getting cold feet about the protectionist agenda and its potentially devastating impact of world trade, throwing a spanner in the EU’s plans. John Kerry, Joe Biden’s climate envoy, has warned the EU that a carbon border tax should be a “last resort,” telling the Financial Times that he was “concerned” about Brussels’ forthcoming plans. He urged the EU to delay any decision until after the COP26 climate summit in Glasgow. "It [a carbon border tax] does have serious implications for economies, and for relationships, and trade,” he said. “I think it is something that’s more of a last resort, when you’ve exhausted the possibilities of getting emission reductions and joining in some kind of compact by which everybody is bearing the burden.” According to Kerry, the UN climate summit in November would be a success if all countries adopted Net Zero emissions targets similar to those adopted by Western nations.The fundamental problem with Kerry’s demand, however, is that it contravenes the Paris Climate Agreement which cements the UN’s key principle of ‘Common but Differentiated Responsibilities and Respective Capabilities.‘ This principle acknowledges that developing nations have different capabilities and differing responsibilities in reducing CO2 emissions. While China has already offered a Net Zero emissions intention by 2060, the Biden administration’s demand that other developing nations adopt similar Net Zero targets as Western nations is quixotic. In light of more than a decade of futile attempts by Western leaders to believe that the developing world — at the COP26 climate summit in Glasgow — would relinquish this key principle and curtail its economic development and prospects in order to save the West’s competitiveness borders on political insanity, i.e.trying the same thing over and over again and expecting different results.
at 20:23:00